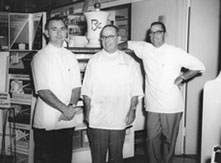 From the moment the doors of the first store opened on May 12, 1946, there has always been a unique sense of family evident in every facet of Lehan Drugs. It is this enduring commitment to its customers that has made Lehan Drugs the trusted healthcare provider in the local community for over 75 years. While it is true that much has changed over that time, one thing has always remained the same. The customers have always been treated like part of the family.

It all started with Emory and James Lehan Sr, brothers and pharmacists, when they opened the first store in DeKalb with their wives, Marie and Dorothy, at 317 East Lincoln Highway (now Andy’s Tap) as a Walgreens Agency. James had owned a store in Michigan prior to this and Walgreens offered to help move him to a new location. He was asked to choose between DeKalb, IL and Chorpus Christi, TX. Jim and Marie chose DeKalb, and, as they say, “the rest is history.” 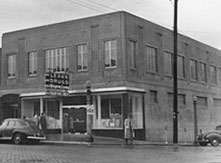 The first location was temporary as the Lehans prepared for their new location to be completed. In 1948, the store was moved to the new Drs Smith building (now The House) where Lehan’s added a soda fountain and restaurant.

It wasn’t long before the counter became a favorite spot for lunch and dinner, and become a popular hangout for local teenagers and adults alike. The fountain was managed at the time by Mr. Balon.

Jim Lehan, Jr. recalls the store being considered one of the finest pharmacies in the entire Midwest. Live music was often provided, played on the store’s Wurlitzer organ.

Customers at the store’s grand opening were treated to a celebrity sighting…the famous “Toni Twins,” spokeswomen for Toni Hair permanents. It wasn’t long before the prescription business was booming and the restaurant was serving up to 2000 folks a day.

In 1951, James’ son, James Lehan, Jr. graduated from the University of Michigan School of Pharmacy and joined his father and uncle at the drug store. His wife, Marjorie, joined the business in 1975 as the bookkeeper and kept the store finances in order until her recent retirement in 2009. Business ownership was transferred to Jim and Marge in the 1970s.

The next several decades saw growth and movement in the business. A new location was opened on Sycamore Road in DeKalb, in what is now the Jewel/Osco building. The grand opening occurred in the summer of 1950. By the 1960s, the store had moved away from the soda fountain model and began to look more like a “traditional” chain drugstore, selling a wide variety of products, including the usual drugstore fare, as well as televisions, cameras, photofinishing, cosmetics, and toys. 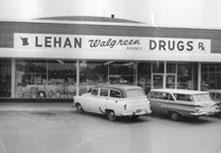 As the business grew, so did the family. Tim Lehan, Jim and Marge’s oldest son, met Ann Gibbs while they were both attending the University of Iowa School of Pharmacy. After the two graduated in 1976, they were married and came to DeKalb to work at the pharmacies.

Soon after, Lehan’s opened a store in Belvidere, and Kampus Korner opened as a convenience store on NIU’s campus across from Chick Evans field house. A store was also opened on South Fourth Street, and eventually moved into a new building across from DeKalb high school in the mid 1980s. Bud Benson was a part-owner in the business as well during this time, helping manage the multiple locations. In the late 1980s, Tim’s sister, Terri (Lehan) Hettel came back to work for the family business, eventually becoming the retail manager. 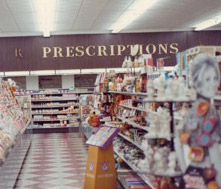 As Lehan’s expanded, so did the chain drug stores throughout America. The early 1980s saw the advent of large connected drugstores, managed care, prescription insurance, technologic advances in record keeping, and a variety of other pressures on small “mom and pop” pharmacies. During this period many independent pharmacies in the country were closed, bought up by larger chain stores, or forced to downsize considerably. Lehan’s was not immune from this pressure. By the mid 1990s, ownership had transferred to Ann and Tim, and the family decided to consolidate its operations into one store, located on S. Fourth St. in DeKalb.

After the consolidation, Tim guided Lehan Drugs through a major remodel in 2000, creating the unique atmosphere found at Lehan’s today. The new look of the store allowed for the addition of a large home medical equipment department and an expansion of the pharmacy area, separating Lehan’s services from those of its large chain competitors. Soon after, Tim’s brother, Patrick, joined the business to spearhead the rapidly growing home medical department.

The latest addition to the collection of Lehan family pharmacists is Tim and Ann’s son, Jon. Like his parents, Jon met his wife, Briana, while at the University of Iowa, and they both graduated in 2004. After serving as a pharmacist in the United States Air Force for 3+ years, Jon and Briana returned home to DeKalb in 2008 to join the family business.

In April 2009, Lehan Drugs proudly announced the addition of a second pharmacy location: Lehan Drugs @ KPG Northwestern. Lehan’s made the move with the Clinic to its current location at 1850 Gateway Drive in Sycamore in late July 2009. Jon Lehan took over as pharmacist manager and began to offer new services such as hormone replacement therapy, medication therapy management, and compounding/customized medications. Seeing an unmet need, he made the decision to expand to the Rockford area by opening Rock Valley Compounding Pharmacy in 2012.

In 2010, Jim Lehan, Jr joined the family business as director of business operations and has since overseen the expansion of the Home Medical Equipment department to both Rockford in 2015 and Freeport in 2019.

Even today, more than 70 years after the first store opened, Lehan Drugs and Medical Equipment continues to remain true to its original commitment to care for its patients in the most professional, compassionate, and friendly environment possible. It is this commitment that has allowed Lehan Drugs to serve the community for the past four generations and hopefully for many more to come.